Drivers dread tight routes.  A tight route is one that is known to "run down" which means taking more time than allotted to complete.  A route can be tight for several reasons. The most obvious reasons are traffic, a great distance to travel, detours, passenger volume, or difficult passengers.

Though it was a beautiful spring day I reported shyly and more than a bit nervous for my first notoriously tight route. As a cadet making a good first impression with the senior driver was important to me. The senior driver for this tight route had the swagger and bravado of someone who revels in a challenge. I quietly consoled myself with the thought that on a weekend maybe I as a cadet could keep the route on time. Before we start the bus he quips, "This route has gotten heavy, even Saturdays." My face betrayed my concern.

He smiles and says, "I talks junk to everbody."   I grinned the rest of the day as his dry wit and obvious joy in interacting with passengers, which kept me entertained even when we were running down.  He is a tall, broad-shouldered black man who lights up when engaged in a verbal tussle.  I wanted him to like me but I came to find out he likes everybody.  It is the secret to his success.  A survival skill on a tight route that can easily frustrate passengers and drivers alike.

At 8am he drove the first run so I could see the stops and turns.  We started the route way far north of the city and had 30 minutes to get downtown on busy thoroughfares.   I took the wheel at 9am with trepidation about the demands of the day ahead.   That second run was the only run I completed on time that day.  Being a rookie is hard on my ego.  Luckily I had a good-natured and seasoned driver to help me keep things in perspective.  He at least enjoyed my anguish.

At 10am on the third run, he says "You smell something? It stinks in here."   I had yet to catch a whiff of what he was picking up on.   Not 15 minutes later a warning light comes on about the buses exhaust system.  He radios for a replacement bus.  Switching buses gets us behind just as traffic is about to pick up.  The tight run had just gotten trickier due to the bus change.  That was the first time that "P1" had to help us get back on time.  P1 is a minibus that plugs routes that are running down.

Now it is noon, we are back on time thanks to P1 and driving a new bus.  I wonder about a break and getting something to eat as the traffic builds.  This route has a left turn across a busy 2 lane thoroughfare.   The senior driver is almost jubilant to share the pain of waiting for what feels like an eternity for the traffic to clear enough for us to safely make that left turn.  Just as I think my opportunity has come, "watch those cars jumpin' or' that hill," he says as he accurately describes the traffic pattern.  We finally turn but have lost precious time.  I marvel at how well he knows this route and I am humbled by his ability to keep it on time.

At 2 o'clock I am so far behind that P1 needs to catch us up again.  This time we sit for 15 minutes while P1 works.  We sit so the schedule for our inbound trip will be correct.  While we wait I realize I finally have a chance to go to the bathroom.   I run over to a fast food place to use the facilities.  It strikes me that I am not the only hungry person on the bus so I buy 4 cheeseburgers.  The senior driver and the 2 passengers who are waylayed with us are amazed.   The food lightens the mood as we finally get underway.

When 4:30 finally arrives I am exhausted and stunned by the difference in skill and experience between me, the cadet, and he, the senior driver.   His composure and willingness to teach impress upon me a desire to master driving skills in spite of the stress of a tight run.  It left me wondering about how easy it is to misjudge the abilities of others because of the temptation to look down on their work.

Posted by Phillip Summers at 9:58 AM 4 comments: 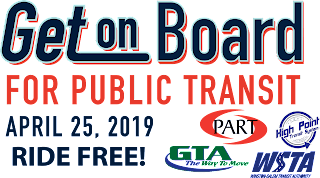 Thursday, April 25, 2019, will be a fare-free day for the following public transportation systems in the Piedmont Region on North Carolina:


I am a huge fan of fare-free systems. Check out this policy brief about fare-free systems, which we wrote two years ago.   I fell in love with the fare-free systems while studying public health in Chapel Hill.  The town is vibrant with pedestrian activity and its busses are full.

Come ride the bus, for free, on 4/25/19 and experience the benefits of public transportation!
Posted by Phillip Summers at 6:17 AM No comments:

Email ThisBlogThis!Share to TwitterShare to FacebookShare to Pinterest
Labels: Opportunity 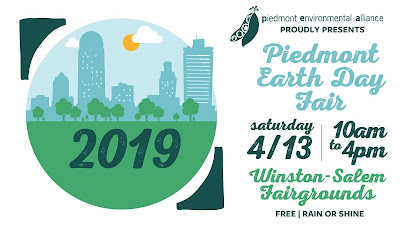 Are you going to the Earth Day Fair tomorrow?  Why not consider using a green transportation option?

Did you know you can use Google Maps to plan your trip?  We are planning to ride the bus starting from Clark Campbell Transportation Center to Winston Salem Fairgrounds Annex.  Check out the options we have (https://goo.gl/maps/B1Vr2jz9Dsx) in Google Maps.


Posted by Phillip Summers at 7:39 AM No comments:

Email ThisBlogThis!Share to TwitterShare to FacebookShare to Pinterest
Labels: Inspiration

This morning I was encouraged by Melissa's example of active transportation. She commuted to school on her bike.  Watch the short vlog for action shots from her ride.

Life is precious.   Driving the bus has given me new eyes to see how precious it is.  In the act of kneeling the bus for an elderly rider or counting a baby in the arms of her mother as a passenger, I get to see it.  Bus drivers are afforded a chance to know their passengers and are part of community building.

We made the short documentary film, "Bus Stop Jobs" to depict a day in the life of a passenger.  After the premiere of the film, the director said she loved how it shows how women find ways to support each other. I have shown the film many times to audiences such as policymakers and students.  In my repeated viewings I came to realize how much I admire both of its "sheroes."

The film is a powerful 10 minute short that will inspire you.  You can imagine my joy the other day when I got to drive one of the stars.

WATCH Bus Stop Jobs on YouTube and COME RIDE with us!

Posted by Phillip Summers at 3:32 AM No comments: 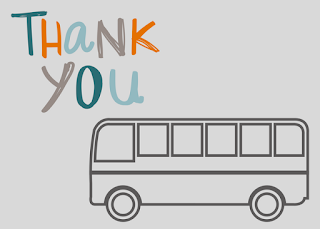 Thank you to the Safety Department and all the Bus Drivers who have taught me in the class room and on the road.  I graduated to driving on my own and I am so very grateful for your instruction.

The last two weeks have been a road trip though Winston-Salem as I shadowed and learned from senior drivers.    I was impressed by their driving skills, rapport with passengers and intimate knowledge of their routes.

The cadet process started and ended on a high note because the routes were in my own community within our city.  My first day was with a quiet leader whose generosity and composure I look forward to emulating.   The process ended with a supportive colleague whose encouragement made the final driving test less onerous.

The routes during the past two weeks took me to new places within the city that I got to experience behind the wheel while hearing the perspectives of the person who normally drove the route.   On tight runs with heavy traffic I was amazed how the driver knew the time points and the logistics like clock work.  On countless routes I heard drivers predict who would be waiting at the stop around the corner based on the riders' routines.

I learned from drivers, some of who have more than 30 years of driving for with the company.  I drove with drivers from right here in Winston-Salem as well as from other countries like El Salvador, Ghana, and Ethiopia.   We fellowshipped together and found common ground on the highways and byways of our community.

I got good advice like "Take your time," and if a passenger is rude, "Don't take it personal."   My favorite piece of advice was: "The number 1 survival skill is bring plenty of lunch."   As a runner with a high metabolism the last thing I need is to get "hangry" on the bus.  I have not witnessed much healthy snacking and I catch a few jokes about my eating carrots.  Interacting with so many new people has really been eye opening.

I have learned about half fare passes, bus transfers, and run boards.  I have loaded wheel chairs and knelt the bus all under the watchful eye of a seasoned driver.   I have learn so much as a cadet, about myself and the logistics of driving a bus, that it is hard to put into words. 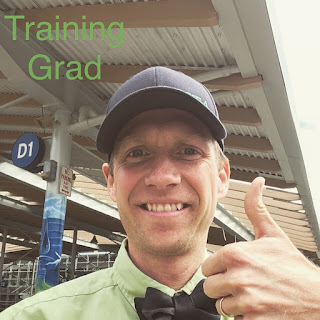 My heart is full! Thank you for coming along.
Posted by Phillip Summers at 9:41 AM No comments: