This is a video of our maiden voyages behind the wheel of a bus.

Email ThisBlogThis!Share to TwitterShare to FacebookShare to Pinterest
Labels: CDL

In the slow and often frustrating fourth week of training, I caught a  glimpse of the transformative power of public transportation.   I had high hopes of getting behind the wheel.   What I witnessed will prove to be more valuable.

It happened on Wednesday, February 20th, which coincidentally was my 40th birthday.  That morning class didn't happen due to the extenuating circumstance of an instructor having the Flu.  In the afternoon we were told to ride bus routes to become familiar with the turns and stops.   It was a nice day but I had no idea that the miraculous power of transit would be visible.

First, we rode Bus 84 out to Hanes Mall with important stops at two of Forsyth Tech campuses.   We gave several folks rides, but nothing too noteworthy happened- maybe it was just the time of day.

Then we rode Bus 88 north to the Industries for the Blind.   It was my first trip to the apartments nestled between North Point and Reynolda.   For the first time, I saw 3 visually impaired people board a bus and safely ride to work.   It felt as if bus drivers were giving sight to the blind.  I later learned that the bus takes over 100 people a day to work there.

Then, at the end of the day, we were told to ride Bus 86.  I thought, "I commute on 86 all the time so what I am going to learn?"  But, I have never ridden 86 to the end of the line at quitting time for when the Second Harvest Food Bank's Triad Community Kitchen (TCK) students are getting out of class.  I was thrilled to see 15 people board the bus at the stop, many of whom were TCK students.  I have several friends whose lives have been changed by Chef Bacon's ministry.

Riding those 3 bus routes might have been the best birthday present I received.  It afforded me a glimpse of the importance of connecting community assets via public transportation.

My classmate came up with a new word to describe me, "bus-ologist."   In the video, he gives an explanation.

The first 3 weeks of training have flown by.   Still waiting to get behind the wheel!

With any luck, I will drive a bus for the first time tomorrow!

I hope to video my maiden voyage. Don't worry it is on a closed course designed for practice.

I am the last orange dot in the graph below.  The new guy with no seniority... 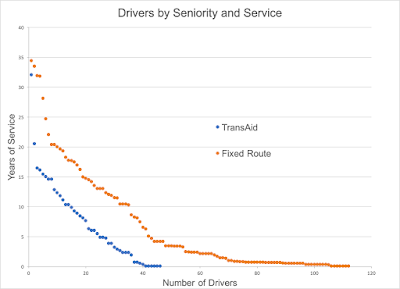 Posted by Phillip Summers at 6:21 PM No comments:

The tenets of defensive driving apply to life. In class, we are learning four trademarked phrases to remind bus drivers how to prevent accidents.  They are "look ahead, look around, leave room, and communicate."

To look ahead is to identify and anticipate potential hazards on the road. In life, it means to have vision for where you want to spend your time and energy while steering clear of pitfalls.

Switching jobs has prompted folks to ask about my vision.  They are quick to point out the potential hazards of driving a bus like pay, insurance, and schedule.  They see the risk of crashes and the harsh side of customer service. My heart sees something different.

My heart sees the words from Isaiah 58. Below is a sample from verse 10.


If you do away with the yoke of oppression,
with the pointing finger and malicious talk,
and if you spend yourselves in behalf of the hungry
and satisfy the needs of the oppressed,
then your light will rise in the darkness,
and your night will become like the noonday.

I hope to address the other tenets of defensive driving in future posts.  Do you think looking around means checking in on loved ones?  Is leaving room about setting boundaries and creating margin in your life?

I am learning that communicating through this blog helps me understand this new season of life.  I hope to hear your thoughts in the comments below.

Posted by Phillip Summers at 6:41 AM No comments:

What does it mean to live simply, or is it just a buzz word?  We constantly need to de-clutter our small house and let go of stuff. We find it therapeutic to purge making room for what is important.

Good food is important to me so simplifying my grocery list is not so easy.  I happily research recipes and test them on my family. Does simplifying mean buying in bulk and having meals on repeat?  Frozen pizza and grilled cheese would be fine in the rotation, but I don’t want to be rid of our fruits and veggie based meals.  Why does is cost so much to eat healthy?

How can I learn to budget for nutritious meals in the reality of my husband's drastic job change? The starting wage for a bus driver who is a head of household with 4 dependents qualifies as poverty.

Yesterday I felt both surprisingly excited and relieved after receiving the news that our 3 kids can now get free school lunch. It is humbling and will certainly help stretch the grocery budget.  Perhaps this is a part of "coming down where we are to be," because receiving help with lunches feels like a gift.

This is a journey, or an adventure, full of gaining new perspectives.  I have taught school many years, on an off, and this is helping me stand in the shoes of many of my students who receive free lunch.

I'm beginning to wonder how we can we make eating healthy, tasty foods less about personal economic status and more about nourishing communities.
Posted by Melissa at 5:41 PM 2 comments:

On lunch break, during my first week of operator training, I began drafting this post at the public library.  Libary's are a rare space where humanity is on display.  Training has felt like such a place.

The class affords perspectives and insights into classmates' lives and creates bonds through shared learning.  We are a diverse group finding a common language while discussing the training manuals we are reading. This first week offered glimpses of the vulgar and the noble aspects of public service.

The instructor explains job hazards such as of passengers wetting themselves. Course jokes belie the real concerns about the dangers of blood-borne pathogens while having to clean up vomit on the bus. Bravado is used to cover up the real concerns of driving a 39,000 lb vehicle with human cargo.

The noble is seen in our cooperation of working together towards a common goal.  A picture of chivalry is caught when discussing the kneeling function of buses to accommodate ADA passengers.  Humanity is heard in the recounting of the importance of warmly greeting passengers. My family and friends have begun to refer to me as Trolley, like the friendly character from the kids' shows Daniel Tiger and Mr. Roger's Neighborhood.

I finish this post in the warmth of my home surrounded by family on my personal computer.  I wrestle with the tension of the concepts of the public versus private good.  The consumer culture tells me that my family's and my comfort should reign supreme.  Learning from and with my classmates about operating a bus is teaching me about public service.

Posted by Phillip Summers at 4:14 AM 2 comments: