Happy to see this is now available on YouTube!

Posted by Phillip Summers at 7:03 AM No comments:

A brief video born out of my excitement to start bus driver training this morning.

Posted by Phillip Summers at 3:29 AM No comments:

Bus drivers wear uniforms to show they belong.    Buying new clothes to become a bus driver has brought up my fears about fitting in.   I am afraid that my different background and experiences will cause me to stick out.  I worry that my education, race, and economic privilege will be barriers for coworkers and passengers to see my heart for the issue of mobility.    I wonder how much of this worry is grounded in reality.

Black shoes are a requirement that you wouldn't think would cause anxiety, but as a runner I am admittedly a shoe snob from way back.  I was fretting about which shoes to get and how much to spend. Would they look cool?  Thankfully, New Balance has an industrial line that has a foam model with a sweet look and feel.  I am comfortable in them.  Even more this pair of shoes represents generosity.  My friend who owns the store graciously gave me these really nice shoes as a way to support the mission of raising awareness of the importance of public transportation locally.

I also met a 70-year-old seamstress who hemmed my new black pants and does uniform work for more organizations than I could readily count. I admired the many boxes of badges from first responders to police departments lining her shop.  She told me she loves riding the bus but has concerns about the young people she sees riding. When her company closed its Greensboro store she started commuting to the Winston-Salem store and daily takes 6 buses.  She didn't want to put the miles on her car or deal with traffic. She is simply more comfortable on the bus. She was thrilled for me and prayed with me about my new job.  The black pants will remind me of how she needs a ride to work to bless others with proper fitting uniforms.

My new black shoes and pants represent these stories, make me eager to look for other points of connection, and less afraid of not fitting in.
Posted by Phillip Summers at 6:29 PM 2 comments:

To drive a bus you need a Commerical Drivers Licence (CDL) Class B with a "P" for passenger endorsement.  To get a CDL you have to pass written, medical and skill tests.  The first stop is the Division of Motor Vehicles (DMV) to take tests for a learners permit.

Hanging around at the DMV is quite the experience. After 3 trips I became acquainted with the staff and relieved to receive the permit.  New jobs are stressful in ways we don't expect. I witnessed test anxiety and hope others find ways to clear this written hurdle.

To prepare for the written test I read the manual, took a practice test and finally discovered the app.  After my initial failure, a DMV staff asked if I had "seen the app?" which turned out to be a Godsend.   Air brakes, combination vehicles, passenger safety is all new to me; the app is a test simulator which helped me pass on my second attempt. I took a third trip to the DMV because the second visit was too close to quitting time and didn't leave enough time for the paperwork.

At my final DMV visit,  I was left wondering whether the $64 dollars required for the permit would be a barrier for potential drivers.  While joyously leaving, an acquaintance waiting in the lobby asked me for the $2 he was short to get an ID and I easily shared it with him.  It saddens me to think of how something as simple as a $13 ID can be a roadblock for many.

The medical test must be conducted by a licensed "medical examiner" who in my case was a Nurse Practitioner (NP) at an Occupational Medicine Clinic. Medical exams are required every 24 months to renew your CDL.  Eavesdropping in the waiting room I realized it was full of truck drivers and the nurse who took my vital signs said drivers are the bulk of their business.

The young NP who conducted my exam reassured me that the red patch in my eye was probably due to strain from the race I ran the previous week.  She was not concerned about the eye, but remarked that not many of her CDL exams are with 50k runners.  I passed the medical exam with flying colors.

New drivers get 8 weeks of training to pass the skill tests. I am confident that this training will afford many more humbling failures as well as the gratification of learning new skills.

His eye is on the sparrow 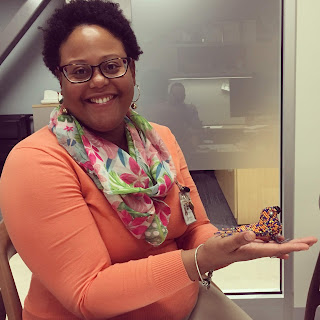 And I know he watches me.  If you don't know this beautiful song then listen to Abigail Washburn sing it.

Doing community engagement allows you to meet folks and hear stories that give hope in the face of hardship.  Keena's story has the grit that makes her voice as a community health educator grounded in experience. This picture of her reminds us that doing health disparity work is being part of His redemptive work.

That gives me hope as I hit setbacks like not passing my initial CDL permit test.   No one likes to fail, but how we respond to failure is what marks our life.

Housing and Transportation are linked

Affordable housing and transportation are linked.  Each has related structural inequalities that affect communities.

Since the 90's, when Hispanics began inhabiting the mill houses and endeavoring to set-up shop in tiendas and taco stands, Waughtown of Winston Salem has grown to be considered the prominent Hispanic Barrio of our small city.   Waughtown is in fact quite diverse, yet it sits on the wrong side of the real estate “tracks” in Winston-Salem. In 2013 and 2017 the city re-evaluated and depreciated the tax values of our homes.

The devaluation has repercussions on borrowing money from a bank.  Loans become out of reach,  even for professionals with good credit.  In 2016, I bought a quarter acre lot two blocks away from my house thinking it an opportune investment.  Buying it from Auction.com was a bit scary and I was leery that the minimum bid of $2,800 seemed too good to be true, even for a bank-cast-off, liability of land that had once been the sight of a burned down house.

I got excited envisioning how the new construction would beautify the community. I found a young couple interested in building on the lot.  This couple took a year and a half to find an architect, and then a builder willing to build the 3 bed 2 bath single story handicap-accessible house of their dreams.   The couple was trying to keep cost down because they weren’t sure how their new home value would compare to the neighbors' homes.   Their ideal house was slated to cost $157,000.

Redlining happens when banks will not invest in neighborhoods they don’t value, and most folks think it is a thing of the past.  Don’t we have a more modern way to fairly access mortgages?  There must exist a more equitable way to get new homes built, right?

But the reality is that banks don’t see neighborhoods like Waughtown as desirable or safe investments.   When the couple went to the bank to get a mortgage to build, the bank agreed to lend only a fraction of the cost.  Based on what they considered comparable values, the bank would only lend $90,000 for the construction of a new home.  That’s a loan for only 57% of the cost to build.   How can a young couple afford a $67,000 down payment? Our new construction dreams were up in smoke.

Sweat equity seems to be the only way projects happen in Waughtown.   Recently the lot sold in a cash transaction to a Hispanic couple who had family living on the same street.   I broke even on the venture and became even more grateful for industrious Hispanic neighbors who see value when others see red.

Posted by Phillip Summers at 5:53 PM No comments:

As I have talked about changing jobs from an academic office to a bus driver, folks have had mixed reactions.  Both reactions such as, "Are you crazy?" and "You are brave."  I am accustomed to being called both, but this time it is different.

"Brave" is now laden with uncertainty about being able to safely drive such a large vehicle.  I am full of questions: Will I be safe from violence? Will I keep my passengers safe? Will other vehicles be safe? Will pedestrians be free from harm?  It feels like a big responsibility, and it's largely out of my control to determine.  I am looking forward to experiencing my role as a safe bus driver.

"Crazy" now carries the weight of being foolhardy to think that my individual efforts can change systems of inequity that have deep roots.  It is full of accusations: will anyone notice? are you doing this out of boredom? Do you really think this will make a difference? I cannot know the impact of my actions, but I look forward to witnessing what takes place.

I am also being encouraged far more than I had imagined.  Other folks are saying, "You will learn so much," and "You are made for just that job," and "I am excited for you!"  Turns out that crazy has its good side and brave has its scary side. I can't wait to see what lies around the next corner.
Posted by Phillip Summers at 10:59 AM 1 comment:

I worked in health research for 9 years. The last 3 were doing community engagement and translational science. During the course of that work, I fell in love with the role that public transportation has in the life of our community. Follow this link to PDFs of some of the policy work that was created by the coalition that I lead.

This piece was featured at https://www.virginiapolicyreview.org/the-third-rail/analysis-of-the-winston-salem-public-transit-system.

I see the potential public transportation has to heal our legacy of segregation and inequity. I hope to be part of improving mobility in our community.
Posted by Phillip Summers at 12:49 PM 9 comments: