Clark Campbell drove a city bus for 45 years.  His contribution and legacy are so profound that though he retired in 1972 riders still remember him.   The transportation center downtown is named after him and he drove more than 3 million miles on our city's streets.

He is a role model because he built rapport with passengers and enjoyed a fruitful tenure in public service. One older gentleman loves to reminisce about his in-law Clark Campbell and the history of Winston-Salem. One morning I got up and stretched at the end of the bus route and he made an off-handed comment, "Clark Campbell always did that too. He would really stress getting up and stretching."

For the rest of the trip, he regaled me with stories about his legendary relative.  He told me that he had a side lawn business and loved to stay busy. I plied him with questions about Campbell but was most intrigued by the tidbits he dropped about Campbell's faith.   He said that Campbell loved to sing hymns and Gospel music.

I enjoy the conversations I get to have with passengers because I learn so much from them.  Seeing regular riders gives you a chance to have ongoing dialogue and gain insight into their life. I have been surprised by how close-knit passengers and drivers become.  I have met mothers, children, significant others, in-laws and, of course, cousins of fellow drivers. You meet all manner of households and kin riding together. Come Ride!


Posted by Phillip Summers at 5:40 AM No comments: 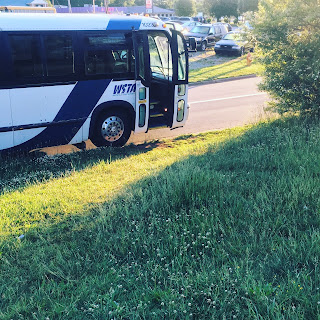 Springtime is a balm
for snarling traffic
and surly passengers.

It soothes the frustration
of broken equipment
and missed turns.

Springtime is a promise
of a day when
creation is made new.
Posted by Phillip Summers at 5:24 PM No comments:

Email ThisBlogThis!Share to TwitterShare to FacebookShare to Pinterest
Labels: Inspiration

Seeing "the traveler" is currently my favorite part of being a bus driver. Or is it the Spring weather? No, definitely it is seeing the beauty of humanity in the face of passengers, especially if I get to help them find their way.

Have you read Khaled Hosseini's poetic short story, Sea Prayer, about refugees? My heart breaks when The mother says to her husband, "Oh, but if they saw, my darling. Even half of what you have. If only they saw.  They would say kinder things, surely." It breaks because I have seen.

I got my first glimpse in high school on the soccer team when the recently arrived Hispanic immigrants were obviously skilled players but struggled academically due to the language barrier.  While witnessing others heap ridicule on them for their struggles to speak English,  my heart was nudged to find ways to make them feel welcome.

The news of political unrest in Venezuela is troubling, where many have been forced to flee their homes to seek asylum.  Our friends who just came back from neighboring Colombia mentioned seeing vast numbers of Venezuelan immigrants looking for refuge in Colombia. Isn't it ironic that both that country and our nation's capital are named after an explorer who was seeking new land?  The Americas were settled by immigrants and political refugees.  It makes me wonder how many Americans are quick to forget our nation's history of welcoming the traveler.

On my route last week I helped a mother and daughter from Venezuela to find their way to the West Campus of Forsyth Technical Community College.  As they rode my bus they confided feeling relief and surprise at meeting someone who could help them find their way in their dominant language.  As I talked with them in Spanish, I could see the anxiety on the mother's face melt away. Connecting newcomers to our community's resources is rewarding.

Also that week a first-time passenger flashed a smile and thrust her phone at me displaying an address to inquire about where she should get off the bus.  I could tell from my recent trip to Guerrero that she was from the Costa Chica region of Mexico.  Most of our neighbors in Waughtown are from there, so I had gone to see what they were fleeing from. My videos from the trip show the landscape and rudimentary fishing but they don't capture the drug/gang violence and the harsh racial tensions that deny many people of opportunity.  Our Guerrerroan neighbors come to America looking for opportunity.

This new passenger was surprised that I readily helped her find her way in her own language. Like many Guerrerroans, she was amazed that I had been to her small village.   Later that week, when she rode my bus again, she had other questions about the schedule as she planned her commute to work.  It's a joy to help the traveler find opportunity in our community.

Sara Groves' music has inspired me for years.  The song below she sings with her daughter. It is entitled "Jesus, See the Traveler."   It makes me wonder if our generation is leaving the next generation a legacy that values mercy and compassion for the traveler. Her song also makes me grateful for my job in public transportation because in my work I get to see and be part of the traveler's journey.